City Hall, NY –  As survivors of sexual harassment continue to come forward across the country from Hollywood to Washington, D.C., NYC Council Member Mark Levine, along with Chair of the Women’s Caucus Helen Rosenthal and  members of the Council’s Women’s Caucus, and women’s advocacy organizations announced today a plan to address the prevailing issue of sexual harassment.

Together, the group outlined a unified commitment to reevaluate and improve sexual harassment policies in the Council and across City government.

As part of a commitment to work with the Women’s Caucus and invest in the resources needed to address the prevailing issue of sexual harassment, Council Member Levine is working towards reforms with the primary goal of protecting City workers from harassment  and increasing transparency, including:

The officials and advocates also announced a new partnership with New York Law School and Assemblymember Charles Lavine to launch a National Conference on Sexual Harassment in the Government Workplace, bringing together government officials, advocates, and academics to discuss existing laws and policies across the nation and propose best practices for government agencies and legislatures.

“Across the country, an epidemic of sexual harassment plagues every corner of every industry from Hollywood to D.C.,” said Council Member Mark Levine. “As a city, we have an obligation to make every level of our government safer and more protective of those who have survived harassment, and as a Council, we must lead by example. To change the culture of how we address sexual harassment, we need to have a thoughtful, robust conversation about it, and I am proud to stand with my colleagues and these advocates in taking this critical first step towards addressing this epidemic.”

“I’m very much looking forward to working with the Women’s Caucus and the rest of our colleagues in the Council to develop best practice recommendations for a comprehensive New York City government sexual harassment policy. Let’s take full advantage of the incredible historical moment in which we find ourselves and create a policy that guarantees a respectful and safe workplace for all City office, agency, and department employees,” said Council Member Helen Rosenthal.

“We are witnessing a watershed moment in our country as society comes to terms with the pervasive sexual harassment and inadequate protocols that exist across every sector” said New York Law School Dean and President Anthony Crowell, “New York Law School is proud to partner with New York state and local government officials as well as advocacy organizations and provide a platform to highlight the best ways forward in establishing government workplaces where every employee can feel safe and respected.”

“We can’t be oblivious to the fact that sexual harassment is affecting every sector of our society, including government,” said Council Member Julissa Ferrreras-Copeland. “As elected officials, we have an obligation to push policies that help protect our workforce. They deserve a healthy work environment, with zero tolerance for sexual harassment or any other kind of inappropriate behavior. Today we lead by example. This commitment to reevaluate and improve our sexual harassment policies will guarantee victims the protection and attention they deserve, by making the reporting of harassment easier. I commend Council Member Levine and my fellow council members at the Women’s Caucus for this initiative and their leadership on this matter.”

“I applaud the Council’s commitment to ensuring that women and men  feel safe from sexual predators at work. Sexual harassment is at its heart an abuse of power.  Her Justice works with women living in poverty, many of whom have been victims of intimate partner violence, so we see firsthand the harm to self, safety, and security that results from that abuse,” said Amy Barasch, Executive Director, Her Justice.

“The right time to re-look our own policies on sexual harassment isn’t in the wake of the next high-profile scandal, it’s right now,” said Manhattan Borough President Gale A. Brewer. “My colleagues are absolutely right to pursue reforms designed to protect victims and encourage reporting and accountability, both within the Council and our city’s executive offices and agencies. I’m glad Council Members Levine and Rosenthal are starting this long-overdue conversation.”

“The subject of sexual harassment is at long last receiving the attention it has deserved for far too long. My partnership with New York Law School and Council Member Levine in launching a National Conference on Sexual Harassment in the government workplace will be constructive and will assist us in protecting one of the most compelling  of human rights,” said Assemblyman Charles Lavine.

“Every person whether they work in government or private industry should be able to do their jobs without fear of being sexually harassed,” said Council Member Adrienne Adams. "We now know that sexual harassment in the workplace is so prevalent that we need to take active measures to stop it before it begins which is why I am joining Council Member Levine, Council Member Helen Rosenthal and the Women’s Caucus to bring attention to this important issue. Thank you to Council Member Levine for your commitment to doing something transparently and expediently to strengthen the city’s sexual harassment policies and for your leadership on this matter.”

“For women to fully participate at all levels of government, both civically and professionally, it is imperative that we create an environment where there is zero tolerance for sexual harassment in the City Council and in city agencies. Greater transparency and more concerted official responses are necessary for the public to begin to know the depth of the problem of sexual harassment in government and be confident that it is being proactively addressed,” said Betsy Gotbaum, incoming Executive Director, Citizens Union.

“As recent events have made plain, sexual harassment is a serious problem in every type of workplace,” said Cathy Bowman, LGBTQ & HIV Advocacy Director at Legal Services NYC. “We commend Council Member Levine, along with Chair of the Women’s Caucus Helen Rosenthal and the members of the Council’s Women’s Caucus, for taking steps to protect employees throughout city government. In addition to reaching hundreds of thousands of workers in agencies throughout the city, the City Council’s decision to secure the city’s own employees sends  a message that sexual harassment cannot be tolerated in any organization, public or private.” 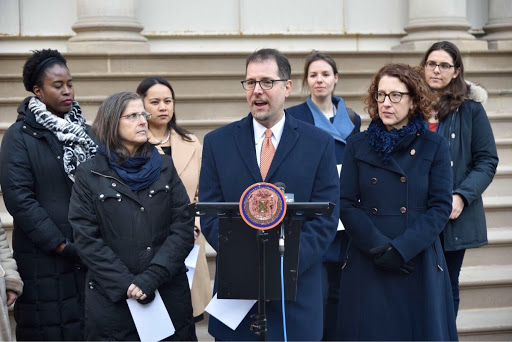